Both automatic and volitional actions start in our brains. While we often cannot “sense” this, when there is damage to the brain, we see the actions are impacted. A common trauma to the brain is a stroke. Depending on where the injury happens in the brain, different actions — speech, walking, memory recall — get affected.

This is explained brilliantly in a book by Dr. Jill Bolte Taylor, My Stroke of Insight. The first few chapters describe what happens physically inside the brain organ, where blood vessels can rupture and create damage to the surrounding tissue. For me, the more fascinating aspect of Dr. Taylor’s descriptions are of the differences in perception from alternate halves of the brain.

The brain is shaped symmetrically, sort of like a walnut. 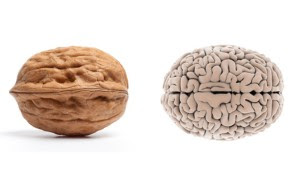 There is a right half and a left half, or hemisphere. While it looks similar from the outside, different kinds of activities get processed in specific sites in the brain. That’s why some people who have a stroke have trouble recalling words, while others lose the use of one side of their body (the opposite side to where the stroke happened in the brain, which is interesting). Also, there is a tube that connects the two hemispheres called the corpus callosum that allows communication between the different sites to coordinate.

The term hemispheric asymmetry refers to the idea that specific actions take place in only one part of the brain. We process language on the left side of the brain; we process attention, memory, reasoning and problem solving on the right. There is an interesting article from the American Speech, Language and Hearing Institute on this topic — teaching speech therapists how to help stroke victims recover their ability to communicate. So, while it’s not polite to accuse a person with ADHD as having “brain damage,” it is useful to look at it as a phase in brain development which might need the same kind of attention and training as a person who’s suffered an injury in that part of the brain.

While a stroke is a traumatic event that can be devastating effect on a person’s ability to function, what is hopeful and useful to study about it is the way patients heal, and rebuild skills that were lost. It is really incredible to think that we can re-build networks of thoughts and actions even if the roadway we used previously has been destroyed. We can actually generate new nerve cells as we practice skills! (This post on BrainBlogger gives a good description.) Yet, I cannot help but see how kids with ADHD can also build or rebuild neural networks to help them master the skills they need for daily living.

By looking at improving outcomes for people with ADHD as a brain-based, developmental problem, we can take away the stigma of a person being lazy or unmotivated. After working with people with ADHD, I quickly so how willing and capable they were — but a lot of things simply did not occur to them. Homework just didn’t bubble up as something they had to do. Other things — usually visual — caught the attention of the right side of their brains, and they focused on a TV show or a video game or sports instead. Part of our job to help people with ADHD is to put the things they need to do in front of them.

All posts express the views and opinions of Carolyn Patterson, BCET. Mrs. Patterson reviews and approves all comments prior to posting.